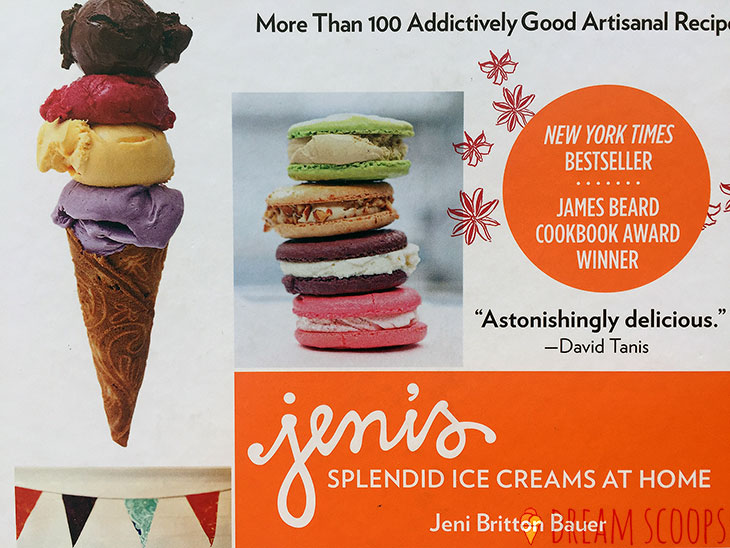 I bought this book because I'd already seen Jenis base recipe on several websites and was completely intrigued. An eggless ice cream that includes cream cheese? Sounds crazy!

The book gets amazing reviews though, with many people claiming that Jenis is now their favorite ice cream and they'd never go back to making ice cream with eggs.

So I jumped in and joined the party. And I've got to say this is a great book and Jenis base recipe is a work of rare genius. 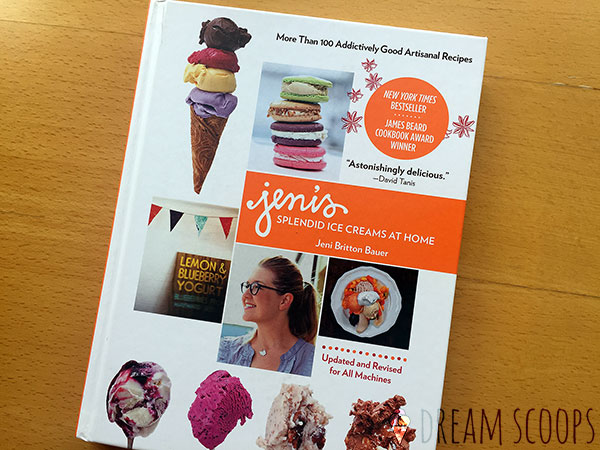 This eggless ice cream base forms the basis of all the dairy recipes in the book. So it's worth giving it some attention before we start. The basic ingredients are:

It uses almost twice as much milk as cream, which is a good start as so many eggless recipes ramp up the cream to produce an ice cream that's just too fatty and cloying for me.

In fact, I'm not sure if my calculations are correct (as the cream cheese might have thrown me a bit), but I make it a 12% butterfat base which is pretty light for an American ice cream, I think.

Without the eggs to emulsify and stabilize the ice cream, Jeni uses cornstarch, just like they traditionally do in Southern Italy. And in fact, up until now the recipe looks very much like a creamy gelato!

However, the addition of cream cheese takes it somewhere else entirely! Jeni explains that the cream cheese helps to bind the ingredients and gives the ice cream body. All the casein proteins in the cream cheese should certainly help emulsify the mix as well. 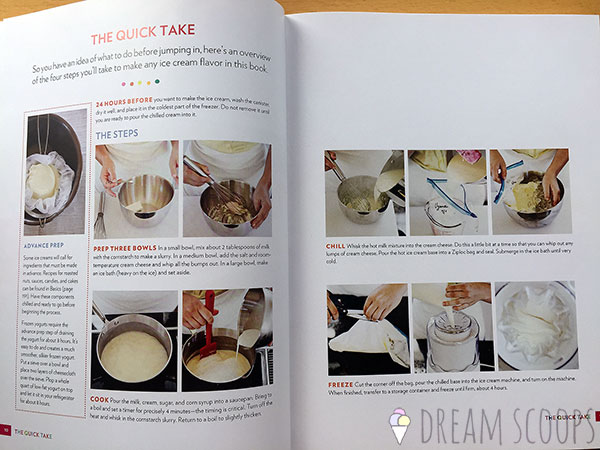 Despite the lack of eggs, you still need to cook the mixture, as the cornstarch needs heat to activate it's thickening powers. The heat will also denature the proteins in the milk which should help to stabilize the ice cream as well.

You might think that the cream cheese would give Jenis ice cream a "cheesy" flavor. But I can't taste it at all. Instead you get a very light and clean tasting base which is the perfect foundation to showcase the flavors she layers on top. And despite the relatively low fat content, it's also really creamy!

Another thing I like about this ice cream base is that all the ingredients are easily available in the supermarket. I'm pretty sure that these are not the ingredients Jeni uses in her shops. In fact she says they use tapioca rather than corn starch and syrup.  And I'm not sure whether they use cream cheese either!

But by making the effort to adapt her recipes in this way, she makes them more accessible and friendly for the domestic cook, which (I think) is always important in a home cook book.

The book starts off with a short biography that describes how Jeni got started making ice cream and how she set up her business. 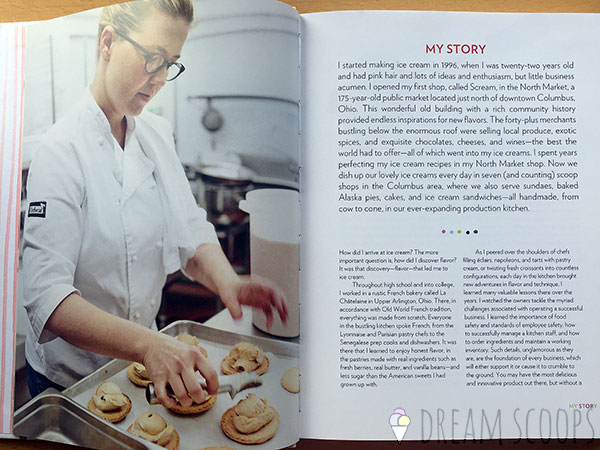 It's inspiring stuff and gives us some interesting background on her ideas and philosophy!

This is a very short but very useful, step by step photographic guide to the stages involved in making Jenis ice cream base. It's great to see a photograph of each stage. And there's some really useful tips on how you know when your ice cream or sorbet is ready.

Like most ice cream books, there's a section on the different ingredients she uses and what they contribute to the ice cream. There's also a useful section on the equipment we should use to make her ice cream, including some interesting views on the best ice cream makers!

The Craft of Ice Cream

Again, this is a pretty standard chapter in most ice cream recipe books. There's not a huge amount of detail, but it explains a little about the individual components that make up ice cream and the science behind their contribution to the final product.

The recipes are divided between four sections based on the seasons of the year: Spring, Summer, Autumn and Winter. 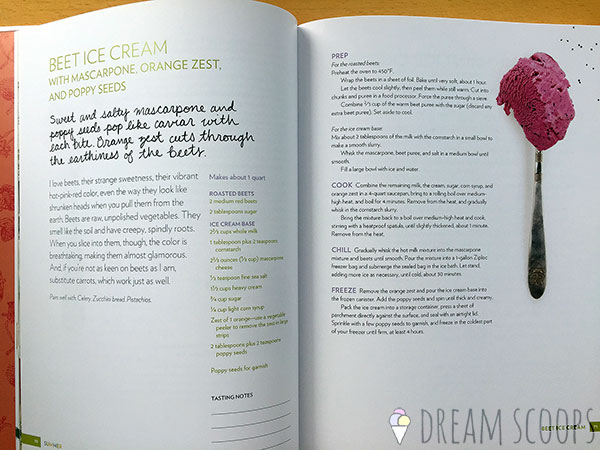 It's a nice idea as not only will the fruits we use be at their best at different times of the year, but the types of ice creams we crave will also be different according to the season. 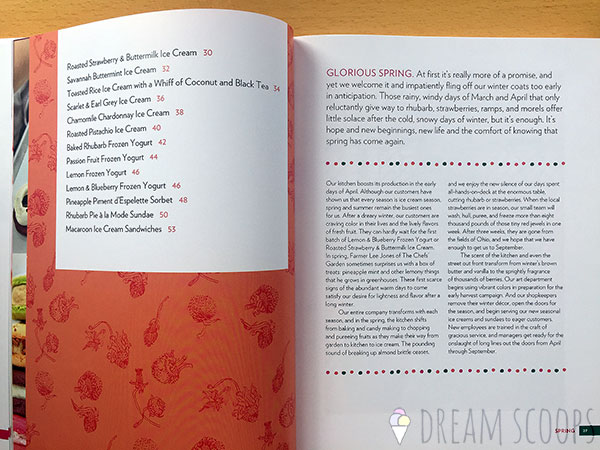 So in the Spring and Summer sections the recipes are lighter with with lots of fruit and citrus notes. While in Autumn and Winter there are more stronger flavors with lots of alcohol, nuts and chocolate. 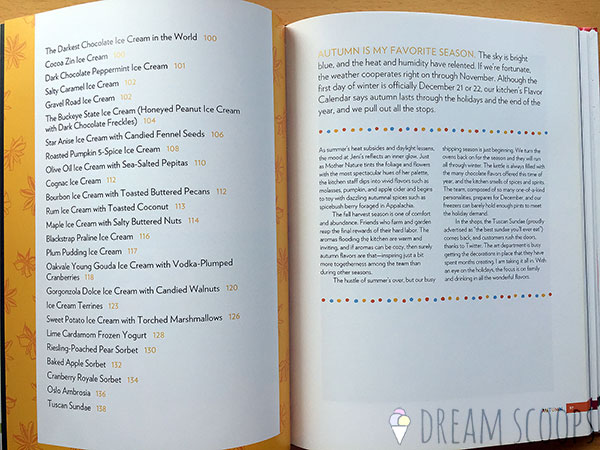 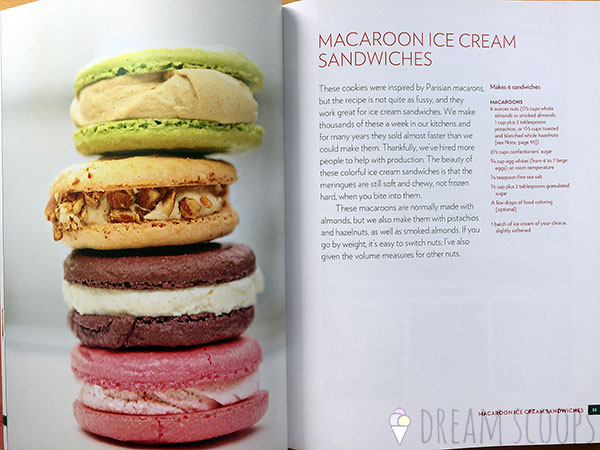 Like most good ice cream books there's a nice mix of the simple and the more complicated. Some of these recipes might be too complicated (or involve too many steps) for me to ever try. But they're great to look at and will certainly give me ideas for my own creations.

At the end of the book, there's a short section on the base recipes for ice cream and frozen yogurt. And a longer section that has the recipes for all the mix ins such as pralines, shells, sauces and candies that are used in the recipes throughout the book. There's also a recipe and step by step photo guide for making ice cream cones.

I think Jenis Splendid Ice Creams at Home is a great book. So far I've made the Backyard Mint Ice Cream, the Lemon Cream Ice Cream and the Watermelon Lemonade Sorbet, all of which came out really well.

Obviously any book that uses the same base recipe for all it's ice creams is going to stand or fall on that base recipe. And luckily that recipe is really, really good.The ingredients are easy to find, it's very innovative and it's super easy to make. 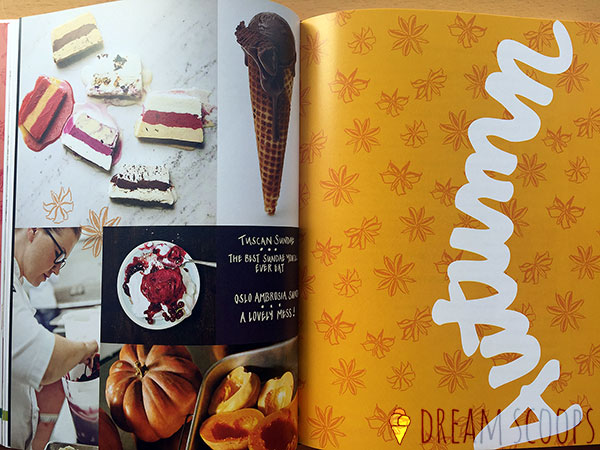 Most importantly it tastes fantastic. It's light and clean while still being very smooth and creamy. And it provides a really nice foundation for the creative flavors that Jeni layers on top.

So don't be put off by the cream cheese or the lack of eggs! This is a very good book, packed full of tempting recipes. Some of them are simple and dead easy to make. Others are more complicated and challenging. But from the ones I've made so far, I'm confident they'll all taste fantastic!