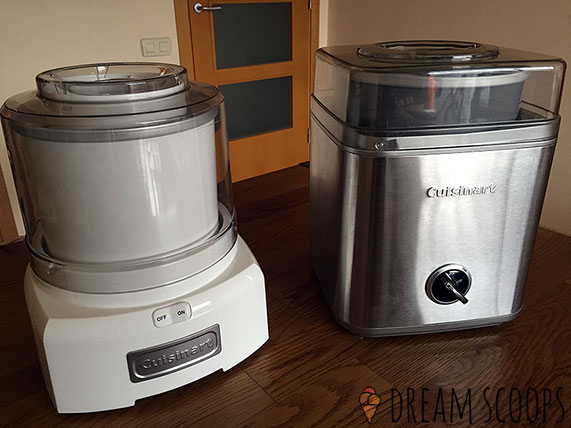 The Cuisinart ICE-30BC and ICE-21 are two of the most popular ice cream makers available today. And when you're trying to choose between them, it might not be immediately clear which is the best for you.

I've actually read plenty of misleading reviews that suggest that one makes much better ice cream than the other. So let's get that out of the way right now: they both make fantastic ice cream!

It's not a case of which one makes the best ice cream, it's a case of which best suits the way you want to make ice cream! And this is all to do with their size and the amount of ice cream they make. 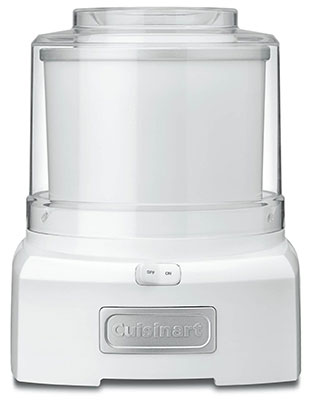 So in this comparison I'll give you a quick recap on how they work (just in case you don't know). Then I'll compare the capacity, size, weight, construction quality, noise levels, warranties and finally the quality of the ice cream.

Quick Navigation
How do they work?
How much ice cream can they make?
How big are they?
How much do they weigh?
What's the construction quality like?
How long are the warranties?
How noisy are they?
What's the ice cream like?
Price
Wrapping up
3 reasons to choose the ICE-21 over the ICE-30BC
3 reasons to choose the ICE-30BC over the ICE-21
Final thoughts

How do they work?

But essentially, they're both "freezable bowl machines". This means they have a removable bowl that you put in the freezer for at least 6 hours, so that a special gel in the walls of the bowl freezes solid.

This gel makes the bowl cold enough, (for long enough) to freeze your ice cream once you remove it from the freezer and place it back in the machine.

However, both the ICE-21 and the ICE-30BC are different from most other freezable bowl machines in that in order to churn the mixture, it's the bowl that's rotated rather than the paddle. This is a big advantage as I'll explain below.

How much ice cream can they make?

This is the biggest and most important difference between the two machines. The ICE-21 can only make up to 1.5 quarts of ice cream per session, while the ICE-30BC can produce up to 2 quarts. This is because the bowls are different sizes... 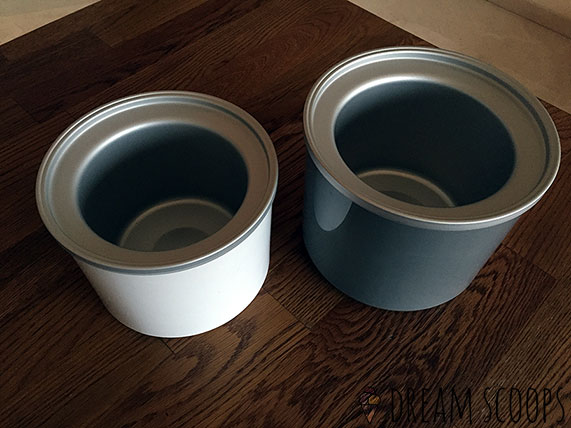 Depending on which machine you buy, you'll be able to make either 1.5 or 2 quarts per day. Unless you buy an extra bowl of course! So if you make a lot of ice cream, then the bigger bowl of the ICE-30BC might be the best choice.

However, since the capacity is related to the size of the bowl, there's something else worth thinking about here. These bowls take up quite a lot of space in your freezer. And if you've got a limited amount of room, the smaller bowl of the ICE-21 might be best.

How big are they?

So the ICE-21 has the smaller capacity. And it looks like it's the smaller machine. But if we actually measure them both, there's a couple of surprises... 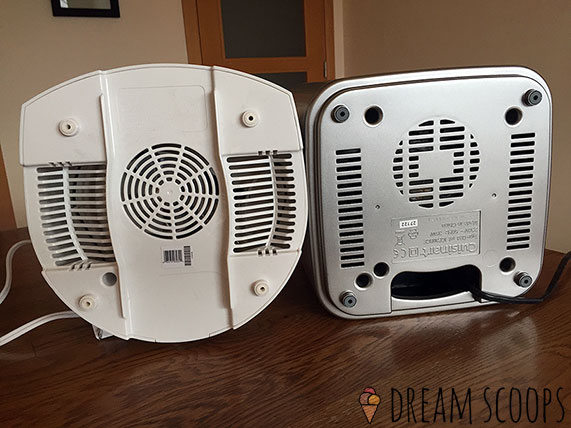 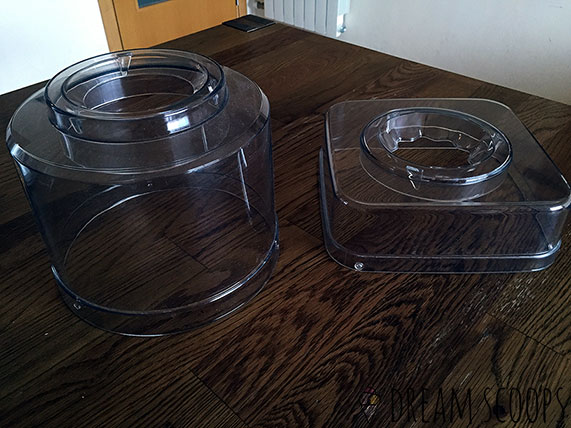 So the footprint of the ICE-21 is actually bigger and it will take up more counter space than the ICE-30BC! Plus it's only slightly shorter.

However, while the ICE-30BC maintains the same dimensions from the base to the top of the lid, the ICE-21 becomes much slimmer above the 4" tall base. So it looks much smaller, even though it isn't.

But the bottom line here is: although the ICE-21 looks smaller than the ICE-30BC and takes up less total cubic space, it will actually occupy slightly more counter space in your kitchen.

How much do they weigh?

The ICE-30BC, weighing 12 pounds, is significantly heavier than 10 pound ICE-21. That's a good 20% heavier. This is because there's much less body to the ICE-21 and the motor is smaller.

While neither are particularly heavy, (especially when compared to the machines with built in freezers), both are heavy enough to convey a feeling of confidence in their construction...

Several people have questioned the construction quality of the ICE-21, suggesting that it's somehow more flimsy than the ICE-30BC.

This isn't the case at all. For sure, with its brushed steel housing, the ICE-30BC looks more premium. While the ICE-21 is made entirely from plastic. But the actual build quality of the ICE-21 is great: there's certainly no feeling of poor or fragile construction. 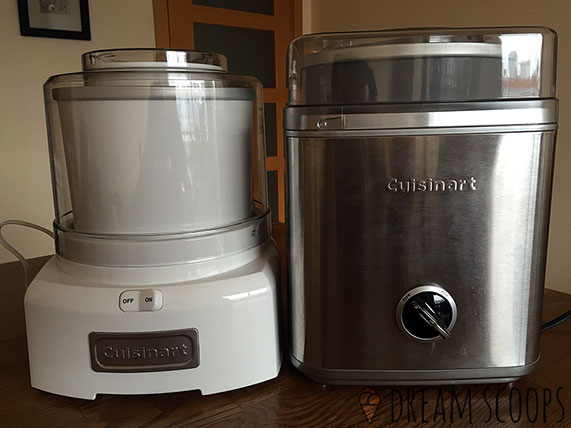 Indeed, both machines seem really well made and durable. The buttons feel solid and responsive. And most importantly the motors have always performed very well for me... 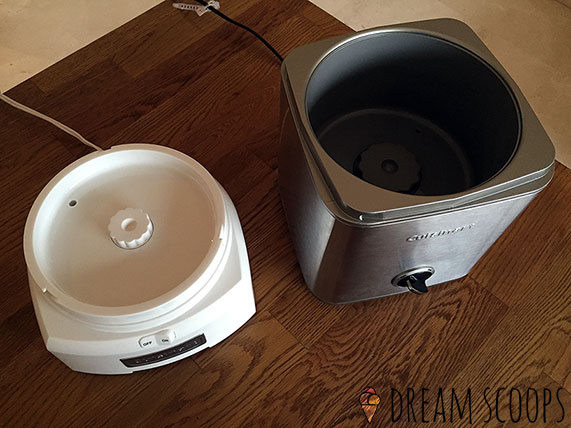 The motor of the ICE-21 is smaller and less powerful than the ICE-30BC. So you might expect it to struggle more with thicker mixes. But don't forget, the bowl it's turning is smaller and lighter too!

And the Cuisinart machines have a further advantage over other freezable bowl machines: the motor turns the bowl from underneath rather than the paddle from above.

This makes them much more efficient. Neither the ICE-30BC nor the ICE-21 struggle with thick mixes in the same way as other freezable bowl machines do.

So in summary, I think both the ICE-30BC and the ICE-21 are well constructed, durable and powerful enough to do the job for many years to come.

How long are the warranties?

Both machines come with a 3 year warranty (5 year in the UK!). However, one of the great things about these freezable bowl ice cream makers is that they're so simple, there's very little to go wrong! You're unlikely to ever need the warranty.

How noisy are they?

One of the most frequent complaints you'll hear about all ice cream makers is the noise they make. And neither of these machines are quiet!

I measured the decibel level of both machines at the start and end of different batches and found that they were more or less the same, the ICE-21 averaging 79 - 82 Db, and the ICE-30BC averaging 80 - 82 Db.

However the ICE-30BC sounds much louder with a deeper, grating and grinding noise that really resonates! So if sound is a big issue, the ICE-21 is definitely the better choice here.

Both of these machine produce top quality ice cream, sorbets and frozen yogurt. Have no doubt about that.

In theory, the smaller capacity ICE-21 should produce a smoother end product than the ICE-30BC. Why? Well, since the bowl is smaller and narrower, more of the mixture will be in contact with (or closer to), the freezing sides. The blade of the dasher is also closer to the sides of the bowl, which means there's less insulating ice left after scraping. 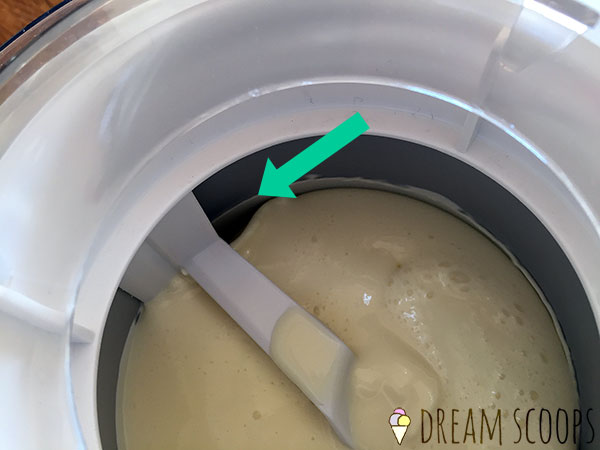 ICE-21: A smaller gap between the blades and the bowl means a very thin layer of insulating ice!

All this means the mixture should freeze quicker. And the quicker the mixture freezes, the smoother and less icy the final product. 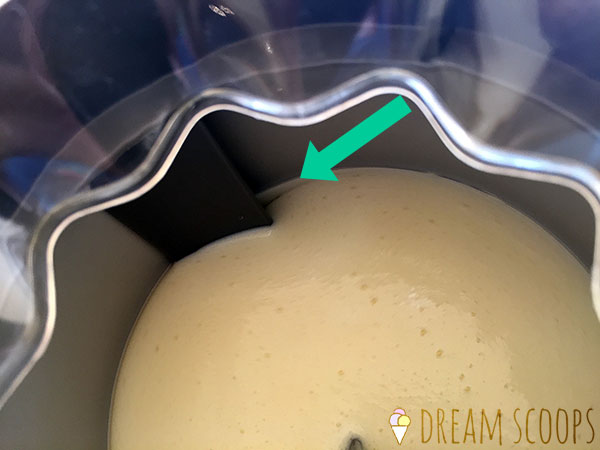 ICE-30BC: A bigger gap between the blades and the bowl means more ice and slower freezing!

In my testing, the ICE-21 does indeed seem to reduce the temperature of the mixture in the middle of the bowl to 21 °F (-6 °C) (which is when you should start extracting it), slightly faster than the ICE-30BC.

Also, the ICE-21 rotates the bowl much faster than the ICE-30BC (32 vs 21 revolutions per minute). This should mean the ice cream made with the ICE-21 has more air incorporated (overrun). 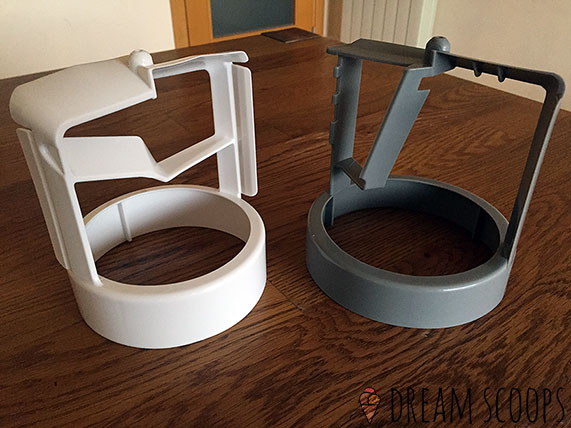 The ICE-21 is a smaller machine, with a smaller body, a smaller bowl and a less powerful motor. So it's obviously going to be the cheaper of the two. However, the ICE-30BC isn't much more expensive.

And in fact they're both very reasonably priced when you consider the quality of the ice cream they produce and how long they're likely to last. (A long time). Don't forget you can also buy spare bowls for both of these machines too.

The first thing to say is that both these machines are capable of making fantastic ice cream, sorbets, frozen yogurts and any other frozen treats.

And while the ICE-21 does make slightly smoother ice cream, there's not a huge difference in the quality of the final product.

But there are other reasons you might choose one over the other. So lets quickly look at those...

1. The bowl takes less room in your freezer

For sure it's only an inch smaller in any direction. But if you've got limited space that might just be the difference between a bowl that fits well and one that doesn't.

2. It takes up less room in your kitchen

Yes, it has the bigger base. But in terms of cubic space it's definitely the smaller of the two machines. So it will feel better in smaller kitchens.

The smaller bowl means it freezes your ice cream faster. While I don't find that makes a big difference in the quality of the ice cream, it does mean you can be eating that ice cream a couple of minutes earlier!

2. It takes up less counter space in your kitchen

Bizarrely, although it's the bigger machine overall, the ICE-30BC actually has a smaller base than the ICE-21. Less than an inch in either direction. But that could be important on a small counter top!

The ICE-30BC definitely looks more premium than the ICE-21. The brushed steel effect body gives it much higher spec feel.

The most important thing to remember here is that it's not a case of an entry level versus a higher end machine. They're both great quality machines.

The improved dasher design of the ICE-21 (and perhaps the faster rotation speed) means that it makes ice cream slightly faster, slightly smoother and with much more air than the older ICE-30BC.

But for me, it's more a case of which one suits your kitchen and the way you want to make ice cream best...

If you'e got a smaller kitchen, a smaller freezer and you don't need big batches of ice cream, go for the ICE-21 [Amazon]. If you've got more space and you like the flexibility of bigger batch size, then go for the ICE-30BC [Amazon].