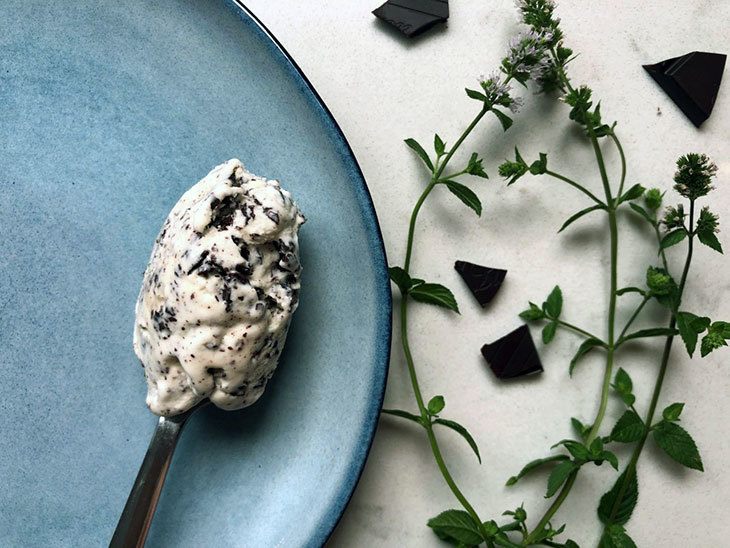 Sometimes the oldies are the best! I've got to admit I didn't much fancy making mint choc chip ice cream.

I don't know if it's bad experiences making other mint ice creams, the fact I'm always more keen on making flavours that I haven't tied before, or just that I'd forgotten how good it can taste.

But, anyway, it was the kids that pestered me into it. And I'm glad they did because it was a real winner. Everyone loved it. Which is not always the case with my experiments!

The secret is obviously getting the mint right. Spearmint which is usually the only mint we can find in supermarkets (at least where I live) is just not good enough. It's best suited to savoury dishes and when I've used it in ice cream before it's never gone down well, with the kids at least.

What we need is Peppermint. Luckily I've been growing two types of Peppermint on the terrace. Regular and Chocolate Peppermint.

Either would work well in this recipe, but this time I used the Chocolate variety. If you can't get fresh Peppermint then I think a Peppermint oil would be fine too. Just add a few drops to taste.

As for the chocolate, I used a 70% Cocoa Lindt Dark. And I probably used a bit too much to be honest. It just didn't look that much when it was melted, so I kept adding a bit more!

The great thing about drizzling the chocolate in at the end of the churning (like the Italians do with Stracciatella) is that it gets broken up into such small flakes that it doesn't really get chalky as it would it bigger chips.

It's also a lot of fun, watching the melted chocolate solidify as it hits the cold ice cream!