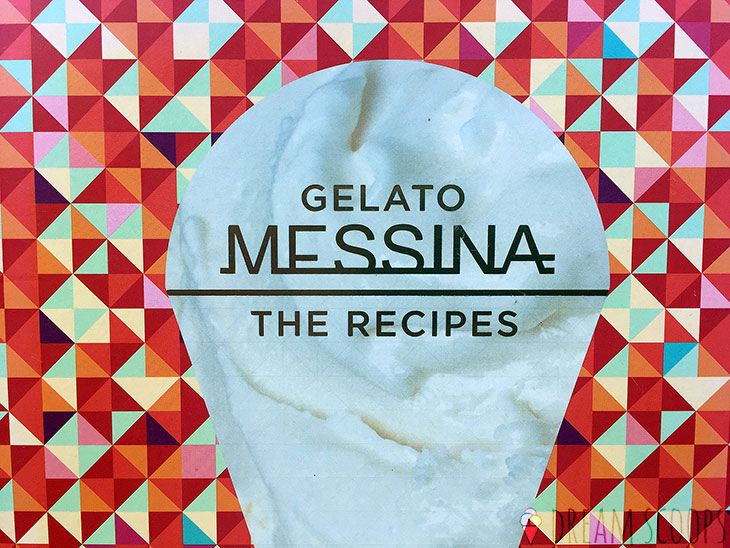 Ignoring all accepted wisdom, I bought this book on the strength of the cover. Not that it gives much away. I just liked the clean, modern design.

Luckily that stylish feel continues on the inside with plenty of colorful Heinz Edelmann type illustrations, and well lit photos of the Messina gelato shops in Australia.

Because essentially this book is a showcase for those Australian stores and the huge range of gelatos they produce. 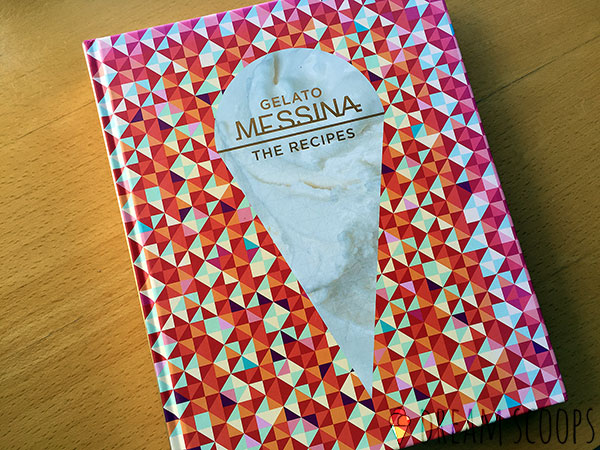 And there’s plenty of photos of those gelatos. In fact, I don’t think I’ve ever seen such attractive looking ice creams before. Each recipe features a delicious close up shot and there’s loads of photos of the rounded, mat colored displays in the shops. 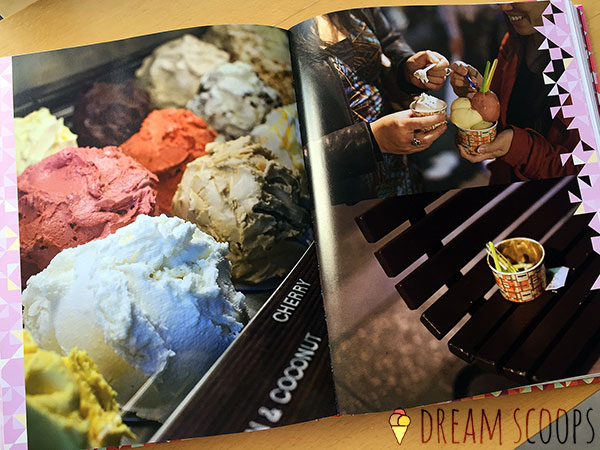 It’s all very seductive. But to be honest, I was really disappointed when I made my first gelato from the book.

I started off with their Fior di Latte which is the most basic dairy based gelato you can make and also the base for all other dairy gelatos. It’s essentially a milk flavored ice cream.

The problem was that the final gelato was so sweet that it tasted more like candy than ice cream to me. Nick Palumbo, the author (and founder of Messina) acknowledges that we might prefer more fatty or less sweet gelatos. And encourages us to experiment.

But after that first disappointment I was a bit discouraged from trying the other recipes and didn’t make any more for a while.

That’s not to say I stopped using the book though. Before all the recipes there’s a section where he talks about the ingredients, how to balance them and the equipment and methods they use at Messina. 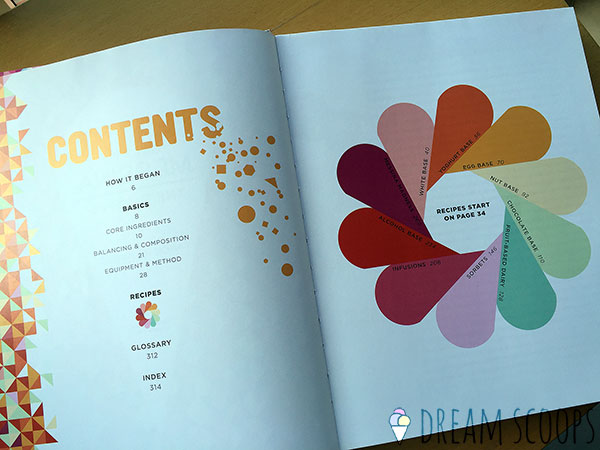 This is basic ice cream science stuff and there’s not a huge amount of detail here. But I picked up some new tips (like using maltodextrin). And it’s a great insight into the way they do things in a professional gelato shop.

And this is an important aspect of this book. As far as I can tell, the recipes here are not adapted for domestic use. They are exactly the same recipes used in the Messina stores.

This is great because it means you get to make the same gelatos you’d eat from their shops!

But it also means that some of the ingredients won’t be easily available. For example, all the dairy based recipes use dextrose and skimmed milk powder. And most of the sorbet recipes use maltodextrin.

Moreover, all the recipes use an unspecified “stabilizer”. At the start of the book Nick talks a little bit about stabilizers and emulsifiers and recommends that you use pre-blended packs. 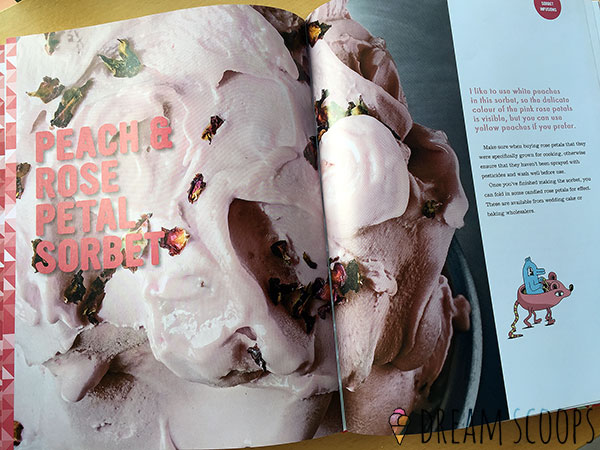 But although I found ice cream stabilizer blends relatively easily online, I couldn’t find any sorbet blends. So in the end I tried to make my own from the various individual stabilizers I was able to find online.

For me this wasn’t a problem. I don’t have any issues with using stabilizers, I’m quite interested in blending my own and I’m perfectly happy shopping for them (and other ingredients) online.

But I know some people are totally against stabilizers. And others won’t want to buy ingredients online. In which case, I don’t think this book is for them…

You could make these recipes without stabilizers but the final gelato won’t be a patch on the versions that use them. And there are other books that have recipes that use more widely available ingredients. 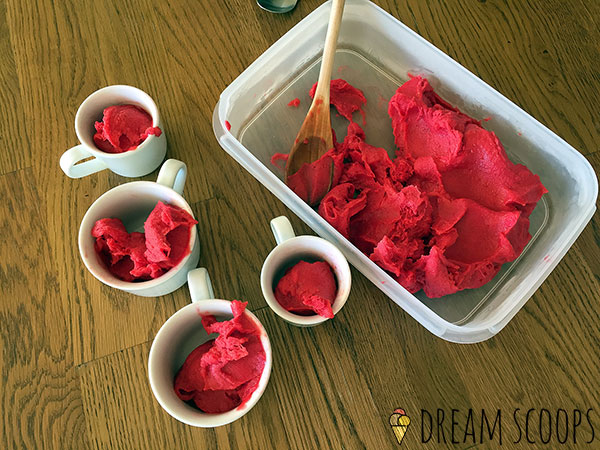 Anyway, after a few weeks off I had another go with a simple Raspberry Sorbet. I still found this was too sweet. But it was gorgeous. And it looked and tasted and had the texture of a gelato you’d buy in a shop. A great success!

Since then I’ve tried a couple of the infusions and I will go back to the Fior di Latte using a tip from the book that suggests reduce the sweetness with maltodextrin.

There’s definitely a lot to try here. So if you still think this might be a good book for you, let’s look at the contents in a little bit more detail…

It starts off with a section called “Basics”. This talks about the core ingredients: water, milk, cream, skimmed milk powder, different sugars, eggs (and why they don’t generally use them at Messina) stabilizers and emulsifiers.

The “Basics” also has a bit on balancing and composition in relation to these ingredients that includes a spreadsheet which I’ve used as the basis for my ice cream calculator.

And at the end Nick talks about the equipment and methods they use at Messina and the problems we have when trying to replicate them at home. This includes a little bit about the disadvantages of domestic ice cream makers.

While the “Basics” isn’t definitive, there’s actually a lot of useful information here. The stuff on the different sugars is particularly useful. And it certainly gives you enough information to start experimenting with the recipes that follow… 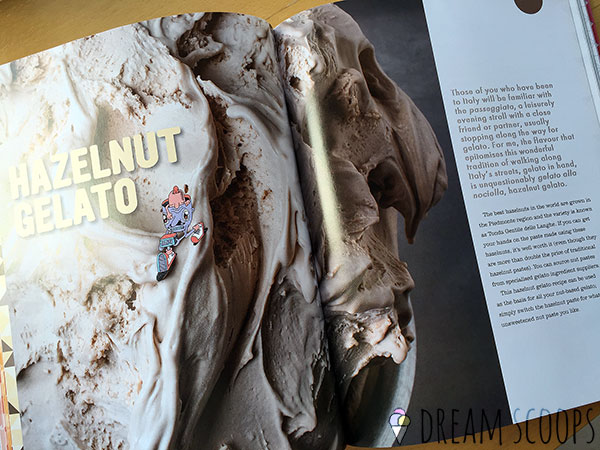 There are 50 recipes in all and they’re divided fairly evenly into dairy and non-dairy gelatos. And this means there’s probably far more sorbets than you find in other ice cream books.

Under the dairy section there’s gelatos made with yogurt, with eggs, with nuts, with chocolate and with fruit. However, just as you’d find it Italy, most of the fruit based gelatos are dairy free sorbets. There are even a few non-fruit sorbets.

There’s an interesting selection of dairy and water based infusions and a small number of alcohol based gelatos.

And then at the end there’s a fairly long section called Messina Madness which includes some of the more exotic, signature flavors they serve up at Messina. These include recipes as normal as Pavlova and as crazy as Satay (with crispy chicken skin!)

All in all I think there’s a good mix between simple, traditional recipes like Lemon Sorbet and Hazelnut Gelato and the more complicated, adventurous flavors like Apple Pie and Poached Figs in Marsala.

Each recipe has two sets of instructions one for making the gelato at home and another for making the same gelato in a professional environment, which is great. You could actually use it to start your own gelato shop! 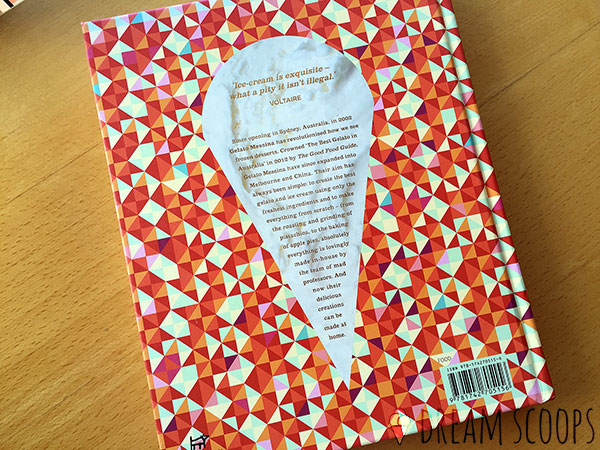 So, despite a rocky start with this book I persevered and in the end I was well rewarded. The ingredients, science and techniques sections are well balanced for a recipe book…

Which means there’s enough information to give you the knowledge you’ll need to start experimenting. But not so much that it’s overwhelming.

Yes, the gelatos taste too sweet for me. But I suspect I’ll have the same problem with most recipe books. And by introducing me to maltodextrin, Nick showed me how to reduce sweetness without reducing solids (and therefore compromising texture and body).

If you don’t want to use stabilizers or you want to avoid buying ingredients online then this is probably not the book for you.

But if you’re prepared to experiment, there’s loads of stuff you’ll want to try and a nice balance of quick and easy recipes and more complicated and time consuming tests of your skills.