Making gelato at home: How to keep it soft

Why do we love gelato? Yes it seems more exotic. But there are certain qualities that we just don’t get with other ice creams…

The lower fat content gives it a cleaner taste that delivers flavor faster, more intensely and with less aftertaste. And the warmer serving temperature gives it that soft, slightly elastic texture that feels so luxurious.

But unfortunately, the qualities that make Italian gelato so delicious also make it very difficult to create at home. Or at least to keep at home. It’s actually easy enough to make. But keeping it in decent condition for any length of time is really tricky.

Why? Well, the lower fat content and the higher serving temperature are linked. Fat doesn’t freeze. This means that higher fat ice creams will remain soft and scoopable at low temperatures. While gelato tends to freeze into a icy brick.

And that’s why gelato is served at higher temperatures. Usually between 10 and 22 ° F (-12 to -6  ° C). This means it can have that clean low fat taste while still remaining soft and pliable.

The problem we have when trying re-create gelato at home is that our freezers are usually set to around 0 ° F (-18 ° C). And this is far too cold for gelato. Left in a freezer at this temperature it will become hard and icy after just three to four hours.

Sure, you can leave it out of the freezer for a while to soften. But it will tend to melt around the edges rather than soften uniformly. And when it goes back in the freezer, the melted ice cream re-freezes creating bigger ice crystals and further compromising the texture. No good at all.

So what can we do? We can’t increase the butterfat content because then it won’t be gelato! And we can’t usually adjust the temperatures of our freezers up to 10 ° F (-12 ° C). But we can adjust the sugar content of the gelato…

But most ice cream is already far too sweet for my taste. And more sugar will obviously make it sweeter! So rather than using more table sugar (sucrose), we can use dextrose which is only 70% as sweet as sucrose and depresses the freezing point of water by almost twice as much. So we win twice!

The recipe I’ve been using so far is great if you eat it all after an hour or so of hardening in the freezer. But if you leave it any longer, it’s ruined. By making it optimal at 5 ° F (-15 C), I should have a larger window to eat it in!

I’m not expecting it to last for weeks. But it would be nice to get a couple of days out of before there is a noticeable degradation in quality.

So anyway, I played about with the existing recipe to lower the freezing point by replacing a lot of the sugar with dextrose.

I was a bit worried that my ice cream maker wouldn’t be able to freeze the mixture at all now and that I’d end up with a sloppy mess. So I added Skimmed Milk Powder (SMP) to soak up some of the liquid and I also added some corn syrup for more body…

The problem was that to maintain the same final weight (600 g) and butterfat content (7%), the amount of milk (and therefore water) was reduced significantly. And this meant that the 3 g of Locust Bean Gum had a much stronger effect…

Once aged overnight, the mixture was really gelatinous. And you could still feel that gelatinous texture in the final ice cream if you let it melt slowly in your mouth. However, it firmed up really well in the machine, froze really well in my freezer and was probably optimal after 4 hours.

Apart from the slightly gelatinous texture though, it was thick, creamy and really nice.

The next day it was definitely a little too hard, but it was still much softer and had a far superior texture to my previous recipe. So encouraged, I tweaked some more…

Here, I essentially dropped the Locust Bean Gum from 0.5% to 0.3% to try to get rid of the gel like texture. And I got rid of the table sugar altogether and bumped up the dextrose to further lower the freezing point.

And it was a disaster. It took much longer to firm up in the machine. It was thin, watery and cold. And it was also slightly grainy!

I suspect the graininess was from the increased dextrose content. If there’s too much dextrose in a mix, as the water freezes, the level of dextrose in the remaining water will rise beyond it’s solubility limit and small crystals of the sugar will start to form. These small crystals are detectable as sandy or grainy texture on the tongue.

So I tweaked again. Bumping the Locust Bean Gum up to 0.4% and putting the tweaking the sugar again…

This was really soft coming out of the machine. I don’t think I’d get away with being any softer. And after putting it in the freezer I had to go out and didn’t get back for another 6 hours. When I did it was frozen solid and pretty much ruined.

So basically its back to the drawing board. At the moment I’m not sure its actually possible to make gelato at home that will stay in reasonable condition if left in the freezer all day. Even if the freezer will go down to 5 ° F (-15 C). 🙁 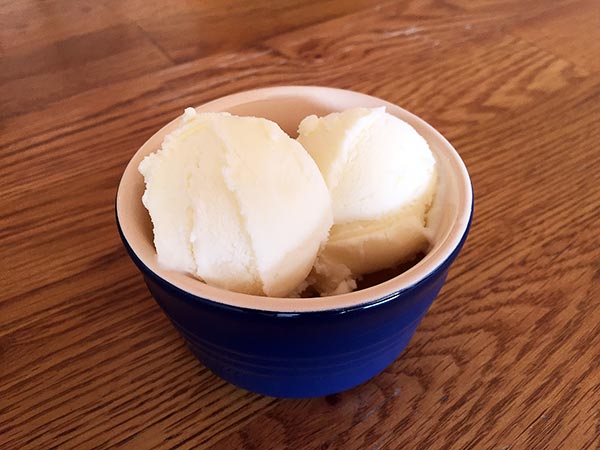 Fior di latte is perhaps the simplest, purest ice cream of all. It’s a Sicilian gelato and fior di latte translates from Italian as “flower of milk”. Or “the best of the milk”.

And that’s all it is: a sweetened, milky ice cream. No eggs. No vanilla. Nothing but milk, cream and sugar.

I’ve seen it described as “monastically simple”. And while there is something quietly spiritual about those soft, white waves, there should be nothing austere about this gelato.

Thick, dense and creamy, as long as it’s not too sweet there’s a whole load of complex dairy flavors to explore here.

For many, a Fior di latte is the best test of a gelato shop. I suppose because any shortcuts an inferior gelateria might try to hide behind other flavors will be starkly apparent in their Fior di latte!

And that’s why it such a great place to start when you start learning to make ice cream. You can really concentrate on finding a balance of sweetness and creaminess and a texture and body that work for you.

In this Fior di latte recipe I wanted to keep everything as simple as possible. So I’ve tried to keep the ingredients to a minimum and the preparation as straightforward as possible. Let’s have a look at each ingredient in more detail:

In this recipe I’m using 3.5% full fat milk. You could use semi-skimmed or even skimmed. But then you’d need to adjust the recipe.

This because when the milk is combined with the cream, we’re looking for a 7% total fat content. So if you use lower fat milk, you’ll need to use a higher proportion of cream.

Why 7%? Any less and it starts to taste a bit “hard” and “metallic” to me. And the sweetness is accentuated so it can start to taste like candy. Any more and the creaminess can leave a slightly cloying aftertaste.

Although it’s called Fior di latte, every recipe I’ve ever seen contains some amount of cream. And as I mention above, with too little cream it starts to taste a little “hard” to me.

There is in fact a variation called Fior di panna (“flower of cream”, obviously). But it’s not clear to me at what point the amount of cream means it’s a Fior di panna rather than a Fior di latte!

Anyway I’m using 36% fat cream. You can of course use cream with a different fat content. Just be aware that you won’t get the 7% fat that I’m aiming for without adjusting the recipe.

Most ice cream tastes far too sweet to me. But we don’t use sugar just for the sweet taste. It also keeps the ice cream thick and soft and stops it getting icy. So we can’t just use less sugar when we want a less sweet ice cream.

What we can do, however is use different types of sugar. This is because different sugars have different levels of sweetness. So here we use a combination of table sugar (sucrose) and the less sweet dextrose.

Dextrose (also called Glucose) is only 3/4 as sweet as table sugar. So if we replace some table sugar with dextrose we still get all the structural benefits of sugar, but the ice cream will be less sweet.

Dextrose also reduces the freezing point of water more than table sugar, which means our ice cream will be softer too!

With no eggs to emulsify and stabilize this low fat gelato, we need to add something else to thicken the ice cream and stop it becoming icy and coarse.

Fior di latte gelato probably originates in Sicily and is essentially a frozen crema rinforzata which is a sweet milk pudding, thickened with cornstarch. And we could use cornstarch here.

But it’s a little bit more difficult to make Fior di latte with cornstarch. And more importantly, I’ve never managed to do it without being able to taste the cornstarch in the final gelato.

Locust Bean Gum works in the same way as cornstarch but is much more effective, much easier to use and most importantly: adds no discernible taste to the final gelato!

You probably won’t be able to find it in your local supermarket. But it’s widely available online, it lasts for ages and as we’ll see, a little goes a long way.