I love ice cream. But I'm also very lazy. So obviously, a no-cook ice cream base will always be the holy grail for me!

With a no-cook ice cream, you just mix all the cold ingredients together and then pop the mixture straight into your ice cream maker. Easy. And you win so many times...

So, you work less and get to eat ice cream sooner. What's not to love? Well, the problem is that most no-cook ice creams are horrible.

The most common recipe you'll find on the web is a Philadelphia base that goes something like this:

Bleugghh. Too fatty and sweet for me. And it gets really icy, really quickly in the freezer.

Most no-cook ice creams are too fatty and too sweet

And this is the problem with most no-cook ice creams. In order to work without cooking, they're often loaded up with fat and sugar. And because they don't use eggs or anything else to stabilize the ice cream, they quickly deteriorate in the freezer.

There's loads of ways round this using fancy sugars and stabilizers. But most people don't have easy access to these ingredients.

I wanted to make a no-cook ice cream that didn't compromise either taste or texture and could be made with ingredients that are easy to find in most supermarkets. So it should:

Not easy, it's true. Almost every recipe on the internet (and to be honest, there aren't many that don't use the aforementioned Philadelphia base), uses far more cream than milk and I know that means they're going to be too fatty for me.

However I did find a different Philadelphia base recipe in the book Ices: The Definitive Guide by Liddell and Weir which actually uses more milk than cream:

So I tried this and it was pretty good. Clean and milky with a nice firm body. The condensed milk gave the ice cream a slightly chewy texture and a very subtle cooked flavor that was in fact, quite nice.

The liquid sugar in the condensed milk no doubt helped control the ice crystals. However it was still a little bit icy. And it did get more icy, quite quickly in the freezer. And in the end, I decided the condensed milk gave the ice cream slightly too much chew. It was a bit toffee like.

Enter skimmed milk powder (SMP). It's easily available in the supermarket, it will replace the milk solids from the condensed milk and by soaking up the water in the milk, it should also help control the iciness. 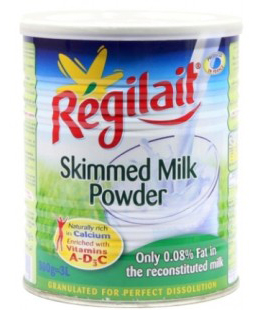 But by replacing some of the condensed milk with SMP, we're also reducing the sugar level. On one hand, this is great as it allows us to taste more of the dairy flavors. But on the other hand, less sugar means the ice cream will freeze much harder in the freezer.

We could add a tablespoon of vodka to help keep the ice cream softer in our freezers. But I just leave it out a good five minutes before I serve it, to soften up. And this works fine!

Any ice crystals that melt while left out, will re-freeze as bigger crystals back in the freezer. I wanted to control this by adding extra stabilization. And with luck, this should also improve the general smoothness and creaminess of the ice cream. But what to use?

Eggs are what we'd usually use. And while there are recipes that use raw eggs in un-cooked ice cream, I didn't think it would appeal to many people! The thing is, most other stabilizers require heating to trigger them. For example, cornstarch, tapioca starch, locust bean gum all need to be heated or they won't work.

The only ones I can think of that don't are Guar Gum and Xanthan Gum. While Guar Gum can still be pretty difficult to get hold of, Xanthan Gum is often used by vegans as an egg replacement in baking. So it should be in the health section of most big supermarkets. Or if not, your local health food shop. 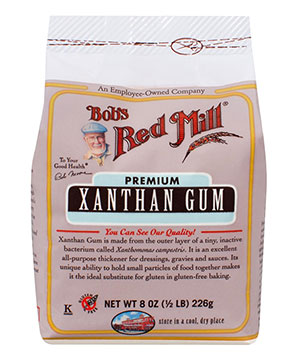 With Xanthan Gum a little goes a long way. We don't need much and in fact, if you do use too much it can give the ice cream a slightly slimy texture. So be careful! Your measurement need to be exact.

You don't have to use any Xanthan Gum, but it will definitely make this ice cream better. It will be smoother coming out of the ice cream maker and will take longer to go icy once it's stored in your freezer.

I actually prefer this base without any vanilla. But if you want that flavor don't add too much or it will overpower those dairy flavors. And always use either vanilla beans or proper vanilla extract. The vanilla essence stuff is artificial and nasty!

Print Recipe
The Perfect No-Cook Ice Cream Base
This is the perfect no-cook vanilla ice cream for the lazy ice creamer! Just mix everything together and add to your ice cream maker. More milk than cream gives it a nice clean taste. The skimmed milk powder, sweetened condensed milk and Xanthan Gum give it a smooth texture, a firm, slightly chewy body and a creamy mouth-feel. Just like all the best ice cream, but with none of the faff! 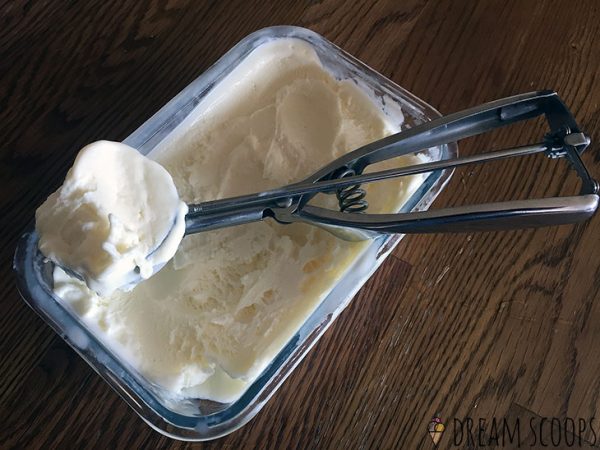